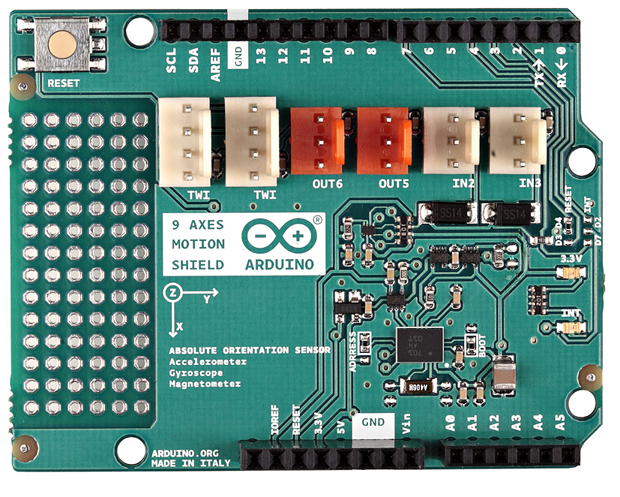 The Arduino 9 Axes Motion Shield is based on the BNO055 absolute orientation sensor (datasheet) from Bosch Sensortec GmbH.
The BNO055 is a System in Package (SiP), integrating a triaxial 14-bit accelerometer, a triaxial 16-bit gyroscope with a range of ±2000 degrees per second, a triaxial geomagnetic sensor and a 32-bit microcontroller running the BSX3.0 FusionLib software.
The sensor features three-dimensional acceleration, yaw rate and magnetic field strength data each in 3 perpendicular axes.

It also provides the sensor fusion signals such as

In addition, it incorporates an intelligent interrupt engine, which allows for triggering interrupts based on

The shield is TinkerKit compatible, which means you can quickly create projects by plugging TinkerKit modules to the board.

Power
The Arduino 9 Axes Motion Shield has no power jack and is powered only when attached to an Arduino board.

The shield features several TinkerKit input/output and communication interfaces. Connecting TinkerKit modules can simplify the creation of a project or a prototype.

The on-board connectors are :

Physical Characteristics
The maximum length and width of the 9 Axes Motion Shield PCB are 2.7 and 2.1 inches respectively. Four screw holes allow the board to be attached to a surface or case. Note that the distance between digital pins 7 and 8 is 160 mil (0.16"), not an even multiple of the 100 mil spacing of the other pins.

For example to use 9 Axes Motion Shield with ArduinoUNO solder the Interrupt bridge on the pin D2.

The 9 Axes Motion Shield can be programmed with the Arduino software (download).

In the Arduino IDE you will find the following examples, go to File -> Examples of Arduino IDE, under NAxesMotion, there are 4 sketches for the use of 9 Axes Motion Shield: